“Nothing takes you home like the street you grew up on,” Berry says.

“What started this was growing up on a great little street with great friends and all of us had a love for music,” Berry tells Billboard of Thomas Road, releasing Nov. 30. “I remember going over to my friend Jeff’s house across the street and listening to Hank Williams with his dad. Us kids used to hang out in my dad’s garage and listen to [Atlanta’s] WQXI 79 AM and all the music they used to play on that station. Music was always around.”

Berry recalls being influenced by such legendary singer/songwriters as John Denver, James Taylor and Carole King. “I lived on Thomas road when Carole King released Tapestry,” Berry says of King’s iconic 1971 album. “My dad bought a stereo and I discovered the FM dial. The turntable was set up on top of the table and the speakers were on the floor, on each side of that little table. I remember lying up underneath that table and turning those speakers in and lying here listening to that Carole King record. It’s pretty incredible stuff.”

Those early influences would lay the foundation for Berry’s country music career. He began playing guitar at age 12. By the time he turned 13, his family moved to another house on Jefferson Street and his father helped the young musician build a studio in the basement where he began recording independent albums. “In high school I was real serious about it and I guess I got into it because I didn’t know any better,” Berry says with a laugh. “We’d set up in that little studio in the basement and record songs all the time trying to figure out what we were doing. Sometime around 1978 we started putting stuff together. By September of ’79 we had a little vinyl record and came up here to Nashville to the record press over in Berry Hill and pressed up 500 copies. It came out in September of ’79. I had just turned 20. That was 40 years ago next September.”

This year Berry marks 25 years since Berry’s self-titled major label debut was released on Liberty Records, spawning the Hot Country Songs No. 1 “Your Love Amazes Me.” Over the years, Berry has populated country radio with such hits as “Kiss Me in the Car,” “You and Only You,” “Standing on the Edge of Goodbye” and “I Think About it All the Time,” and his smooth, soulful tenor has been heralded as one of country music’s best voices.

Berry is currently in the midst of his 22nd annual Christmas Songs and Stories tour, which kicked off Nov. 16 in Marietta, GA. He’s performing 21 dates before wrapping up in Macon, GA on Dec. 22. During the first part of each show, Berry will perform previous hits and new material, then after intermission will return to the stage to perform more than an hour of Christmas songs. “There’s seven of us on stage and it’s developed into a really nice show,” he says. “We really try to celebrate Christmas and what I believe it’s all about and that being the birth of Jesus. We celebrate family and all those aspects of it, but it’s really all about Christ.”

Berry always enjoys serving up Christmas songs, and this year he’s equally excited about sharing new songs from Thomas Road. Berry co-wrote three of the songs, including the title track, which celebrates how far he’s come since he first picked up a guitar on Thomas Road. “You talk about all the places you go and where life takes you, but nothing takes you home like the street you grew up on,” he says, “and the kids you grew up playing ball with down the street.”

Berry co-wrote the poignant ballad “The Richest Man” with Liz Hengber and Will Robinson. “I had an idea about writing a song about my dad,” Berry shares. “A lot of it is about things he taught my brother, sister and me. A lot of things he taught us in life had nothing to do with money, more importantly it had to do with heart and that’s where this song comes from. In talking with Liz and Will and putting this together, it just formulated into a really nice idea. People have really been moved by the song at the shows when we’ve been performing it. It’s been nice to see.”

Berry co-wrote “Don’t Think I Ain’t Country” with Country Music Hall of Famer Bill Anderson. “I was on my way to go write with THE Bill Anderson and I was thinking to myself, ‘I need something. I’m going to write with Bill. I don’t need to walk in empty handed.’ And as I was coming down I-65, this big ole pickup truck blows past me — one of those that you have to climb up in with a ladder — and I mean he blows by me like I’m sitting still. I point my finger at him and said, ‘Don’t you think I ain’t country because I ain’t got a big ole truck like that.’ And I thought to myself, ‘don’t think I ain’t country’ and I start singing lines. I was driving and didn’t have anything to write on. I didn’t have a recorder handy and didn’t even think about grabbing my phone to record anything. I got to Bill’s office and said, ‘Don’t talk to me. I’ve got to write this down.’ I grabbed a guitar and he said, ‘Oh my goodness. Let’s get on that,’ so we jumped on it and we wrote ‘Don’t Think I Ain’t Country.’ It’s just talking about all the things that country is more who you are than what you got or what you don’t have. It’s just who you are in your heart and soul.”

The new EP was produced by Chuck Howard, the producer who helmed Berry’s early hits including “Your Love Amazes Me,” and Barry Weeks. He reconnected with Howard when he and Weeks did “Beautifully Broken,” a song Berry recorded for the film of the same name starring Eric Roberts, Scott William Winters and Benjamin A. Onyango. After a theatrical run, Beautifully Broken hits Netflix Dec. 4.

Berry includes “Beautifully Broken” on Thomas Road. “Everybody has been broken. It’s simple as that. Everybody knows what brokenness feels like,” Berry says of the song’s appeal. The story in the film became even more emotional to Berry after he and his wife, Robin, took a mission trip over the summer to Rwanda. “We were there for about a week and a half and it was quite remarkable to see how these people still live after thousands of years. A lot hasn’t changed,” he says. “Robin and I did music for vacation Bible school. It’s a whole different way of life. We got to go to the Genocide Museum. That’s what Beautifully Broken is about or was inspired by. It’s about three families and the tapestry that God weaves for these people that save each other’s lives.”

One of Berry’s favorite new songs is “Why Didn’t I.” Penned by Weeks and Michael Boggs, the lyric speaks of living life to the fullest with no regrets. As someone who survived being hit by a car when he was 21 and had surgery for a brain tumor the same day “Your Love Amazes Me” hit the top of the chart, Berry has dealt with a lot of ups and downs. “You might think you are as tough as nails, but you are not. We are fragile beings. A blister smaller than the end of my finger changed my entire everything,” he says of the brain tumor that changed his personality and upended his life. “It wasn’t cancerous. It was this little thing that blocked the drainage of fluid down the spinal column and turned me into somebody else. You start to realize how fragile are we. We have a life expectancy. We have an expiration date. We don’t know what that date is and we have an opportunity to live our lives without asking, why didn’t I?”

Berry plans on releasing music more frequently in the coming years and he’s pleased with Thomas Road. “One thing about this little project that we’ve created is nobody can accuse me of doing the same thing over. Nobody can say oh he’s just rehashing that last record. That ain’t happening,” he grins. “There’s not much on here that I’ve done before. ‘Why Didn’t I’ is a real stretch. It’s very pop, but it’s very me. There’s nothing on there that you’d go, ‘Oh that doesn’t sound like John Berry!’ It all does, but there’s lots of different.”

After nearly 40 years of making music, Berry is appreciative of his career longevity and just how far he’s come since Thomas Road. “A lot of it is survival. How long can you stay? How long can you sit at a poker table?” he says. “How much time and money do you have to sit? Sooner or later your chance is going to come around. Stay in the game, but if you walk away from the game and don’t play, you can’t win. If you are able, stay at the table. And we’ve been at the table for 25 years.” 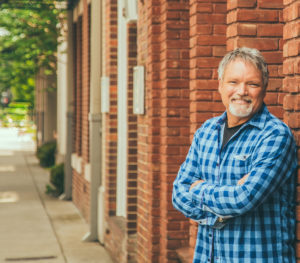