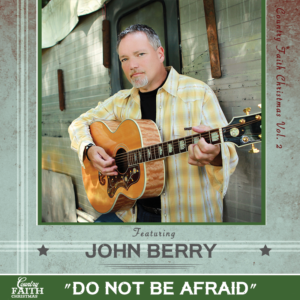 Distributed through Curb/Word Entertainment, the album is available now through digital retailers, including Apple Music and Amazon here.  Country Faith Christmas Vol. 2 will be sold exclusively in Cracker Barrel stores and is one of only four featured Christmas releases at Cracker Barrel’s over 600 stores, which are located across the U.S.

“I am beyond excited to have a song on the Country Faith Christmas project,” said John Berry. “Christmas is the most special time of year and I believe Do Not Be Afraid is a perfect song for celebrating the birth of our Lord and Savior Jesus Christ.”

“I have been a big fan of John Berry since I first heard that amazing voice more than two decades ago. Over the years, I’ve had the pleasure of interviewing him and learning that the man behind that voice is just as impressive off stage in the character he displays and his compassion towards people,” said Deborah Evans Price. “His Christmas collection is one of my all-time favorite holiday albums and I’m so thrilled that  “Do Not Be Afraid” is featured on Country FaithChristmas, Vol. 2. Excited that it is included on such an incredible compilation Christmas album.”

The new holiday release follows the original Country Faith Christmas album, which was released in October 2013. Following its release, the album became the #1 CD Pick in People Country and was featured in Parade magazine as well as many other national publications, including Billboard, Country Weekly and more. Additionally, Country Faith Christmas debuted in the Top 10 on Apple Music’s Top Country Album Chart.

The Country Faith series was originally inspired by the popular books, Country Faith and Country Faith Christmas, written by Nashville-based journalist, Deborah Evans Price. Price is a Country Music Association award-winning author, as well as a freelance writer for Billboard, Sounds Like Nashville, First for Women, Redbook and Woman’s World. Price is the co-founder of Country Faith, LLC where, “Celebrating the Heart and Soul of Country Music,” is her ultimate goal. She has partnered with Wildfire7 and Bob DeMoss to produce the Country Faith brand and its product line.  For more information, please visit their website.